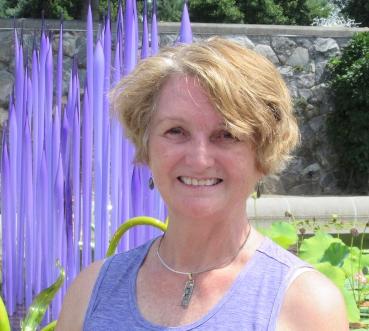 Some years ago I faced a personal crisis. In the spring of that year 3 cranes came everyday to the field beside my house. From the first sighting I felt an emotional calm that had been absent in the previous months. It is as if these birds were the vital sign that after a winter of emotional pain my life would soon be right again. I watched for them each day and they always returned bringing a certainty of hope and the courage to start over.

Nature heals. Cranes are a symbol of hope and healing and are often the subject of my artwork. Through my artistic expression healing emotion reaches out  to you. It is my hope these collages invite you to sense the tranquility and mystery nature brings as it heals.

Natural beauty inspires me. Whether it be hiking Lake Louise in Canada, viewing ancient petroglyphs in the West, driving the lush lanes of Ireland or biking Wisconsin trails I find a deep connection to the landscape.  Traveling confirms how the natural world enriches us and that is what I convey in my collages.

Spending 29 years teaching  was an outlet for my creativity and imagination. I thrived on the daily interaction with children and adults. When I retired I decided to explore an inner artistic life.  After a year of watercolor classes I learned a technique for creating my own paper for collage. It opened a new world of experimentation. I developed a style of unique, one of a kind collages with distinctive backgrounds.   Using my imagination and creativity in this way has been invigorating and fulfilling. Retirement has been busy, growing experience. You can view a video about the collageprocess by clicking the link on the "Learn More " page of this website.

You can contact me via email mccoygkj@yahoo.com  and follow  GailMcCoyArt  on Facebook.  My husband and I split our year between Sun Prairie,WI and Naples, FL.  You are welcome to stop by my studio in WI or our home in Naples to view art by appointment.

A Select Sampling of  Exhibitions